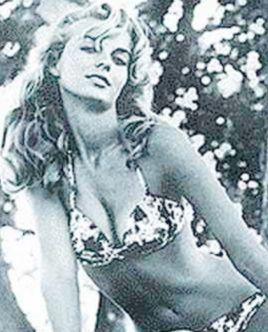 Geri passed away on November 9, 1982 at the age of 46 in Los Angeles, California, USA. Geri's cause of death was drug overdose.

Geraldine "Geri" McGee (May 16, 1936 – November 9, 1982) was an American model, socialite, and Las Vegas showgirl. Her involvement with criminal activity in Las Vegas, along with that of her husband Frank "Lefty" Rosenthal, was chronicled in Martin Scorsese's film Casino (1995). The screenplay for Casino was written by Nicholas Pileggi and Scorsese, based on Pileggi's biography about McGee and Rosenthal titled Casino: Love and Honor in Las Vegas. Sharon Stone portrayed McGee in the film, with the character's name changed to "Ginger McKenna", and was nominated for the Academy Award for Best Actress for her performance.
McGee grew up in the Sherman Oaks area and graduated from Van Nuys High School in 1954. Her aunt, Naomi Ingram, inherited a large amount of money upon the death of her husband, O.W. Ingram, whose family owned land in Georgia. Ingram offered to send McGee to Woodbury Business School, where she had sent McGee's sister Barbara. McGee told her aunt she did not want to attend Woodbury but would rather attend a different school, and her aunt refused to pay for any other school but Woodbury. McGee instead began working in office jobs during the day, and would look for contests and modeling jobs on the side.

McGee died on November 9, 1982 in Los Angeles, aged 46. She was found heavily drugged in the lobby of the Beverly Sunset Hotel, on Sunset Boulevard, on November 6, and died three days later. Her sister stated she believed McGee had been murdered by the people who had tried to kill Frank Rosenthal just weeks earlier, because perhaps she "knew too much" about the Las Vegas underworld. Another theory is that Rosenthal believed McGee was responsible for the bomb and in retaliation had her killed.
The Los Angeles coroner ruled McGee's cause of death was an accidental overdose. The coroner found a lethal combination of cocaine, valium, and whiskey in her system. She was interred at Mount Sinai Memorial Park, a Jewish cemetery.