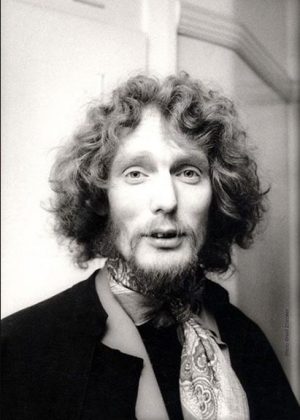 Ginger passed away on October 6, 2019 at the age of 80 in Canterbury, United Kingdom.

Peter Edward "Ginger" Baker (born 19 August 1939) is an English drummer, best known as the founder of the rock band Cream. Baker's work in the 1960s earned him praise as "rock's first superstar drummer", although his individual style melded a jazz background with his personal interest in African rhythms. Baker is an inductee of the Rock and Roll Hall of Fame as a member of Cream and is widely considered one of the most influential drummers of all time, recognised by his induction into the Modern Drummer Hall of Fame in 2008, and his induction into the Classic Drummer Hall of Fame in 2016. Baker is credited as a pioneer of drumming in genres like jazz fusion, heavy metal and world music.
Baker was infamous for his violent temper and for confrontations with musicians and fans. Rolling Stone reporter David Fricke wrote in 2012 that even in old age, "you get close to Baker at your peril." His relationship with Jack Bruce was so volatile that during a Graham Bond Organization concert he once attacked him with a knife.

Baker was married four times and fathered three children, Nettie, Leda, and Kofi. Baker and his first wife, Liz Finch, had their first child, Ginette Karen, on 20 December 1960. Baker's second daughter, Leda, was born 20 February 1968. Baker's son, Kofi Streatfield Baker, was born in March 1969 and named after Baker's friend, Ghanaian drummer Kofi Ghanaba.
Baker struggled with heroin addiction throughout his life, having begun using the drug in the 1960s while a jazz drummer in London clubs. Each time he travelled to Africa, he would get sober temporarily only to relapse. He estimated that he stopped using the drug around 29 times during his life, but was only able to quit permanently after moving to a small Italian village in 1981 where he took up olive farming.
In February 2013, Baker said he had chronic obstructive pulmonary disease from years of heavy smoking, and chronic back pain from degenerative osteoarthritis. In February 2016, Baker announced he had been diagnosed with "serious heart issues" and cancelled all future gigs. Writing on his blog, he said, "Just seen doctor ... big shock ... no more gigs for this old drummer ... everything is off ... of all things I never thought it would be my heart ..." In late March 2016, it was revealed that Baker was set for pioneering treatment. "There are two options for surgery and, depending on how strong my old lungs are, they may do both." He added, "Cardiologist is brilliant. Yesterday he inserted a tube into the artery at my right wrist and fed it all the way to my heart — quite an experience. He was taking pictures of my heart from inside — amazing technology ... He says he's going to get me playing again! Thanks all for your support". In June 2016, it was reported he was recovering from open heart surgery, but had also suffered a bad fall, which caused swollen legs and feet.
On 25 September 2019, Baker's family reported that he was critically ill in hospital, and asked fans to keep him in their prayers. While it was announced Baker was holding his own three days later, he eventually died on 6 October 2019 at the age of 80, at a hospital in Canterbury.