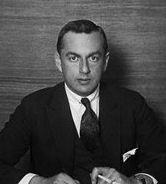 Guy Reginald Bolton was a British-American playwright and writer of musical comedies. Born in England and educated in France and the U.S., he trained as an architect but turned to writing. Bolton preferred working in collaboration with others, principally the English writers P. G. Wodehouse and Fred Thompson, with whom he wrote 21 and 14 shows respectively, and the American playwright George Middleton, with whom he wrote ten shows. Among his other collaborators in Britain were George Grossmith Jr., Ian Hay and Weston and Lee. In the U.S., he worked with George and Ira Gershwin, Kalmar and Ruby and Oscar Hammerstein II.