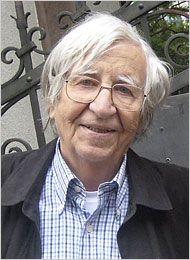 Heinz Edelmann (20 June 1934 – 21 July 2009) was a German illustrator and designer. He was born in Ústí nad Labem, Czechoslovakia, into the Czech-German family of Wilhelm Edelmann and Josefa (née Kladivová) Edelmann. He was well known as an illustrator in Europe, but is probably most famous for his art direction and character designs for the 1968 animated film Yellow Submarine.