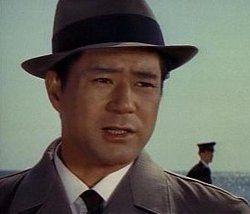 Hiroshi Koizumi (小泉博, Koizumi Hiroshi, birth name written as 小泉 汪) (12 August 1926 - 31 May 2015) was a Japanese actor, best known for his starring role in the 1955 film Godzilla Raids Again as well as other Toho Studios monster movies. He was born in Japan. He is a graduate of Keio University in Tokyo.