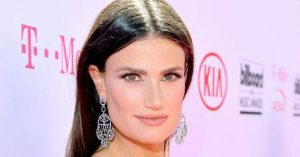 Idina is alive and kicking and is currently 51 years old.
Please ignore rumors and hoaxes.
If you have any unfortunate news that this page should be update with, please let us know using this .

Does Idina Menzel Have the coronavirus?

Idina Kim Menzel is an American actress and singer. Menzel rose to prominence when she originated the role of Maureen Johnson in the Broadway musical Rent. Her performance earned her a Tony Award nomination in 1996. She reprised the character in the musical's 2005 film adaptation. In 2003, Menzel originated the role of Elphaba in the Broadway musical Wicked, a performance for which she won the 2004 Tony Award for Best Actress in a Musical. Menzel returned to Broadway as Elizabeth Vaughan in the 2014 musical If/Then, which earned her a third Tony Award nomination.
Menzel married actor Taye Diggs on January 11, 2003. They met in 1995 during the original production of Rent, in which Diggs portrayed the role of Benjamin Coffin III, the landlord. On September 2, 2009, she gave birth to their son, Walker Nathaniel Diggs. In late 2013, it was reported that Menzel and Diggs had separated after ten years of marriage. Their divorce was finalized on December 3, 2014.

Menzel began dating actor Aaron Lohr and they appeared together in April 2015 at the White House Correspondents' Association Dinner. In August 2015, Menzel and Lohr bought a home located in Encino, Los Angeles, California. They both starred in the 2005 film adaptation of the Tony and Pulitzer Prize-winning Broadway musical Rent, as well as the Off-Broadway musical, See What I Wanna See. On September 23, 2016, Menzel announced that she and Lohr were engaged. They were married over the weekend of September 22, 2017.