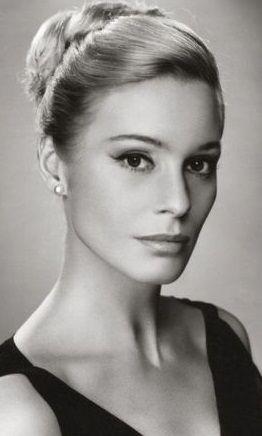 Ingrid passed away on January 7, 2004 at the age of 77 in Stockholm, Sweden. Ingrid's cause of death was cancer.

Trained in ballet, Ingrid Thulin went on to study acting at the Royal Dramatic Theater in Stockholm. After several decorative film roles in the 1940s and early 1950s, she was cast in the American-financed production Foreign Intrigue opposite Robert Mitchum. Though nominally a leading lead, the depth of her acting skills remained untapped until she began working under the direction of Ingmar Bergman, first on the stage, and then in the classic Wild Strawberries, in which she played the daughter-in-law. Thulin continued essaying cool-but-complex characterizations for Bergman, culminating with Cries and Whispers, in which she was co-starred with Liv Ullmann and Harriet Andersson. She was also well served dramatically in Resnais' La Guerre Est Finie (1966) and Visconti's The Damned (1968), cast in extensions of the foredoomed characters that she'd played for Bergman. In 1961, Thulin was cast in MGM's remake of Four Horsemen of the Apocalypse, in which her dialogue was dubbed by Angela Lansbury. Though she could hardly be blamed if she chose to avoid future English-language productions following this demeaning experience, Ingrid went on to appear in Return from the Ashes (1965), Cassandra Crossing (1977), and the TV miniseries Moses the Lawgiver (1975; as Miriam)--with her own voice intact. Under the aegis of her husband, Swedish Film Institute cofounder Harry Schein, Ingrid Thulin directed the 1966 short subject Hangvelse, as well as the feature-length One and One (1978) and Brusten Himmel (1982).