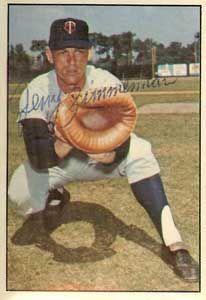 Gerald Robert Zimmerman (September 21, 1934 – September 9, 1998) was an American professional baseball player and coach. He played all or part of eight seasons in Major League Baseball for the Cincinnati Reds and the Minnesota Twins from 1961 to 1968, primarily as a catcher. Born in Omaha, Nebraska, he attended Milwaukie High School in Oregon.