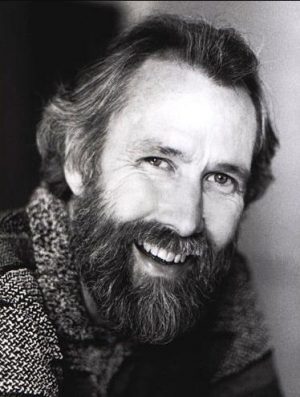 Jim passed away on May 16, 1990 at the age of 53 in New York City, New York, USA. Jim's cause of death was organ failure (due to streptococcal toxic shock syndrome).

James Maury "Jim" Henson was an American puppeteer, artist, cartoonist, inventor, screenwriter, film director and producer who achieved international fame as the creator of the Muppets. Born in Greenville, Mississippi, and raised in Leland, Mississippi, and Hyattsville, Maryland, Henson began developing puppets while attending high school. While he was a freshman at the University of Maryland, College Park, he created Sam and Friends, a five-minute sketch-comedy puppet show that appeared on television. After graduating from the University of Maryland with a degree in home economics, he produced coffee advertisements and developed some experimental films. Feeling the need for more creative output, Henson founded Muppets Inc. in 1958.
Henson married Jane Nebel in 1959, and their children are Lisa (b. 1960), Cheryl (b. 1961), Brian (b. 1963), John (1965–2014), and Heather (b. 1970). Henson and his wife separated in 1986, although they remained close for the rest of his life. Jane said that Jim was so involved with his work that he had very little time to spend with her or their children. All five of his children began working with Muppets at an early age, partly because "one of the best ways of being around him was to work with him", according to Cheryl. Henson was a strong supporter of the civil rights movement.

Henson appeared with Kermit on The Arsenio Hall Show on May 4, 1990, and it was his final television appearance. He disclosed to his publicist that he was tired and had a sore throat, but he felt that it would soon go away. He then traveled to Ahoskie, North Carolina with his daughter Cheryl to visit his father and stepmother. They returned to their home in New York City the following day, and Henson cancelled a Muppet recording session that had been scheduled for May 14. His estranged wife came to visit that night.
Henson was having trouble breathing at around 2 a.m. on May 15, and he began coughing up blood. He suggested to his wife that he might be dying, but he did not want to take time off from his schedule to visit a hospital. Two hours later, he agreed to be taken by taxi to the emergency room at New York Hospital in Manhattan. Shortly after admission, he stopped breathing and an X-ray revealed that he had abscesses in his lungs as a result of a previous bacterial infection. He was placed on a ventilator but he quickly deteriorated over the next several hours despite increasingly aggressive treatment with multiple antibiotics.
Henson died at age 53 on May 16, 1990, just over 20 hours after being admitted to New York Hospital. Dr. David Gelmont announced that Henson had died from Streptococcus pneumoniae, an infection that causes bacterial pneumonia. However, he confirmed on May 29 that Henson's immediate cause of death was organ dysfunction resulting from streptococcal toxic shock syndrome caused by Streptococcus pyogenes.