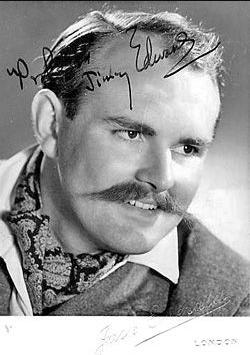 James Keith O'Neill "Jimmy" Edwards, DFC (23 March 1920 – 7 July 1988) was an English comedy writer and actor on radio and television, best known as Pa Glum in Take It From Here and as headmaster "Professor" James Edwards in Whack-O!
Edwards was a feature of London theatre in post-war years, debuting at London's Windmill Theatre in 1946 and on BBC radio the same year. His early variety act, where he first used the name Professor Jimmy Edwards, was described by Roy Hudd as being "a mixture of university lecture, RAF slang, the playing of various loud wind instruments and old-fashioned attack". He later did a season with Tony Hancock, having previously performed in the Cambridge Footlights revue. He gained wider exposure as a radio performer in Take It From Here, co-starring Dick Bentley, which first paired his writer Frank Muir with Bentley's script writer, Denis Norden. Also on radio he featured in Jim the Great and My Wildest Dream.

He appeared in Whack-O on television, also written by Muir and Norden, and the radio panel game Does the Team Think?, a series which Edwards created. In 1960 a film of Whack-O called Bottoms Up was written by Muir and Norden. On TV he appeared in The Seven Faces of Jim, Six More Faces of Jim, More Faces of Jim, Make Room for Daddy and Sykes, in Bold As Brass, I Object, John Jorrocks Esq, The Auction Game, Jokers Wild, Sir Yellow, Doctor in the House, Charley's Aunt and Oh! Sir James! (which he also wrote).
He was married to Valerie Seymour for 11 years. During the 1970s, however, he was outed as a homosexual, to his annoyance. After the ending of his marriage, press reports spoke of his engagement to Joan Turner, the actress, singer and comedian, but the reports were suspected to be a mutual publicity stunt. During the 2015 Gold documentary Frankie Howerd: The Lost Tapes Edwards was mentioned by Barry Cryer as one of several performers of the postwar era forced to conceal their homosexuality due to prevailing norms. He lived in Fletching, East Sussex and died from pneumonia in London in 1988 at the age of 68.