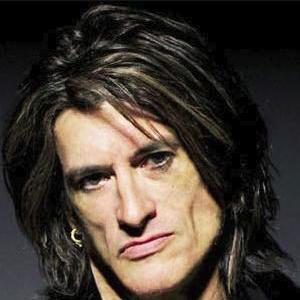 Anthony is alive and kicking and is currently 71 years old.
Please ignore rumors and hoaxes.
If you have any unfortunate news that this page should be update with, please let us know using this .

Does Joe Perry Have the coronavirus?

Anthony Joseph "Joe" Perry is the lead guitarist, backing and occasional lead vocalist, and contributing songwriter for the American rock band Aerosmith. He was ranked 84th in Rolling Stone's list of The 100 Greatest Guitarists of All Time. In 2001, he was inducted into the Rock and Roll Hall of Fame as part of Aerosmith, and in 2013, Perry and his songwriting partner Steven Tyler were recipients of the ASCAP Founders Award and were also inducted into the Songwriters Hall of Fame. In October 2014, Simon & Shuster released Rocks: My Life In and Out of Aerosmith, written by Joe Perry with David Ritz.
Perry was married to Elyssa Jerret from 1975 to 1982. Together they had a son, Adrian.[6] With his second wife, Billie, whom he married in 1985, he has two sons, Tony and Roman. She has a son, Aaron, from a previous relationship.[6] Adrian and Tony Perry are founding members of the rock group Dead Boots.[58] As of circa 2014, Perry and his wife had homes in Vermont, Massachusetts, Florida and Los Angeles.

He was rushed to a hospital on November 10, 2018 after collapsing following a performance at Madison Square Garden in New York with Billy Joel. This follows a 2016 incident in which Perry also collapsed backstage before a performance by the Hollywood Vampires, a band featuring Johnny Depp and Alice Cooper. EMTs on site revived Perry and immediately transported him to the hospital in that incident.