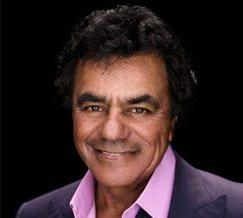 Johnny is alive and kicking and is currently 86 years old.
Please ignore rumors and hoaxes.
If you have any unfortunate news that this page should be update with, please let us know using this .

Does Johnny Mathis Have the coronavirus?

John Royce Mathis (born September 30, 1935) is an American singer-songwriter of popular music. Starting his career with singles of standard music, he became highly popular as an album artist, with several dozen of his albums achieving gold or platinum status and 73 making the Billboard charts to date. Mathis has received the Grammy Lifetime Achievement Award and has been inducted into the Grammy Hall of Fame for three separate recordings.
His appearance on the popular TV program The Ed Sullivan Show in June 1957 helped increase his popularity. Later in 1957, he released "Chances Are" which became his second single to sell 1 million. In November 1957, he released "Wild Is the Wind" which featured in the film of the same name and was nominated for the Academy Award for Best Original Song. He performed the song at the ceremony in March 1958.

The week before his appearance at the Academy Awards, Johnny's Greatest Hits was released. The album spent an unprecedented 490 consecutive weeks through 1967 (nine and a half years) on the Billboard top 200 album charts including three weeks at number one. It held the record for the most number of weeks on the top Billboard 200 albums in the US for 15 years until Pink Floyd's The Dark Side of the Moon reached 491 weeks in October 1983.
Mathis has undergone rehabilitation for both alcohol and prescription drug addictions, and he has supported many organizations through the years, including the American Cancer Society, the March of Dimes, the YWCA and YMCA, the Muscular Dystrophy Association and the NAACP.