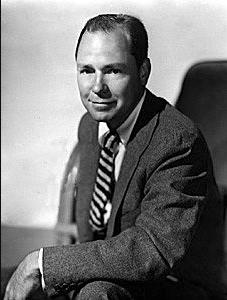 Johnny Mercer is one of American's best-known lyricists and composers of popular movie music. He began his distinguished career as an actor and vocalist in a band. He went on to collaborate with many renowned composers, including Jerome Kern, Hoagy Carmichael, and Henry Mancini. Mercer was a prolific composer who wrote everything from Broadway musicals to pop songs, but interestingly, he could not read a note of music. During his career in films, Mercer won four Oscars for the songs "On the Atchison, Topeka, and the Santa Fe" from The Harvey Girls, "In the Cool Cool of the Evening" from Here Comes the Groom, "Moon River" from Breakfast at Tiffany's (1961), and the title song of Days of Wine and Roses (1962). "That Old Black Magic" and "Jeepers Creepers" are among his best-loved pop songs.