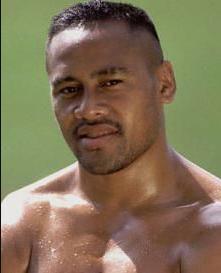 Jonah Tali Lomu, MNZM (born 12 May 1975) is a former New Zealand rugby union player. He had sixty-three caps as an All Black after debuting in 1994. He is generally regarded as the first true global superstar of rugby union. He has had a huge impact on the game. He was inducted into the International Rugby Hall of Fame on 9 October 2007, and the IRB Hall of Fame on 24 October 2011.