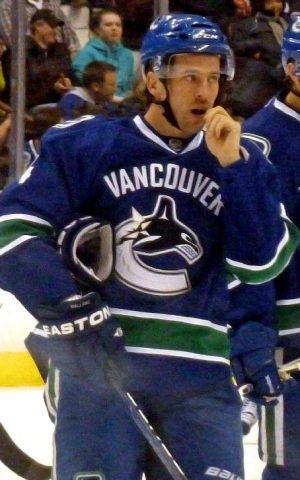 Keith is alive and kicking and is currently 39 years old.
Please ignore rumors and hoaxes.
If you have any unfortunate news that this page should be update with, please let us know using this .

Keith Galen Ballard (born November 26, 1982) is an American professional ice hockey defenseman who is currently an unrestricted free agent. He previously played in the National Hockey League with the Phoenix Coyotes, Florida Panthers, Vancouver Canucks and the Minnesota Wild. He played college hockey for the Minnesota Golden Gophers of the Western Collegiate Hockey Association (WCHA) for three seasons. After his freshman year, he was selected 11th overall by the Buffalo Sabres in the 2002 NHL Entry Draft. Before he made his NHL debut, he was traded twice – initially to the Colorado Avalanche, then to the Phoenix Coyotes. He played his professional rookie season in 2004–05 with the Coyotes' American Hockey League (AHL) affiliate, the Utah Grizzlies, then debuted with Phoenix the following season. After three years, he was traded to the Florida Panthers, where he spent two seasons before being dealt to Vancouver at the 2010 NHL Entry Draft. Internationally, Ballard has represented the United States in four World Championships, winning bronze in 2004. He has also played in two junior tournaments – the 2000 IIHF World U18 Championships and 2002 World Junior Championships.