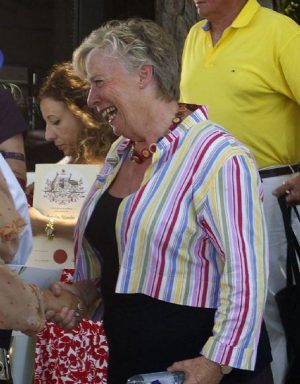 Maggie is alive and kicking and is currently 77 years old.
Please ignore rumors and hoaxes.
If you have any unfortunate news that this page should be update with, please let us know using this .

Maggie Beer AM (born January 1945) is an Australian cook, food author, restaurateur and food manufacturer.
Despite not having any formal training as a chef, Beer has accumulated a triumphant career spanning almost five decades. Her only paid cooking job was at a Scottish sailing school during a European trip in her early twenties. She stated: "I used the whole of their larder for the four-month season in eight weeks because I'm a very generous cook, that's the only way I know how to cook". After relocating from Sydney to the Barossa Valley, Maggie and her husband Colin established the Farm Shop in 1979 which morphed into the Barossa Pheasant Farm Restaurant later that year. The restaurant became known for serving locally sourced pheasant as well as a pâté, known as Pheasant Farm Pate. Maggie and Colin operated the hugely successful restaurant until 1993. Later, she became a partner in the Charlick's Feed Store restaurant in Ebenezer Place, located in the Adelaide city centre.

Currently, Beer operates a business in the Barossa which produces a range of gourmet foods, including Pheasant Farm Pate, quince paste, verjuice and gourmet ice creams. She co-hosted the ABC television cooking program The Cook and the Chef with Simon Bryant, who is the Head Chef for the Hilton, Adelaide. She has also appeared several times as a guest judge and guest masterclass presenter on MasterChef Australia.
She married Colin Beer on 17 January 1970 and the two own a cottage home in the Barossa Valley. She has two daughters, Saskia and Elli. Saskia died suddenly on 14 February 2020, aged 46.