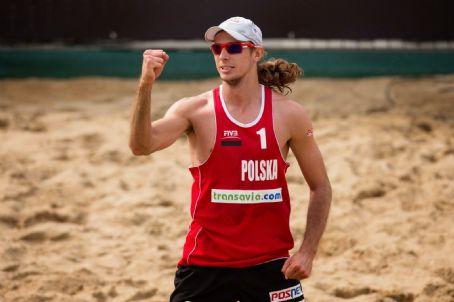 Mariusz is alive and kicking and is currently 36 years old.
Please ignore rumors and hoaxes.
If you have any unfortunate news that this page should be update with, please let us know using this .

Mariusz Prudel (born 21 January 1986) is a beach volleyball player from Poland. He competed in the 2012 Summer Olympics and lost to the Latvian team of Aleksandrs Samoilovs and Ruslans Sorokins on 28 July 2012 in a Pool D preliminary match. The score was 12–21, 21–15, and 15–12. Prudel and his partner Grzegorz Fijałek will compete against the American team of Jake Gibb and Sean Rosenthal on 30 July 2012 and the South African team of Freedom Chiya and Grant Goldschmidt on 1 August 2012. Prudel and Fijałek are considered to be medal contenders in the 2012 Olympics. He and Fijałek were ranked fifth before the competition began after placing 25th at The Hague Open, the pair's 2012 debut. However, the two placed seventh in the Olympic qualifiers. In July, Prudel and Fijałek won a bronze medal at the Berlin Grand Slam.