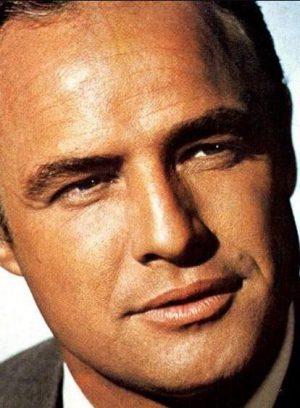 Marlon passed away on July 1, 2004 at the age of 80 in Westwood,Los Angeles, California, United States. Marlon's cause of death was respiratory failure from pulmonary fibrosis with congestive heart failure.

Marlon Brando's father, Marlon Brando, died on July 1, 2004 as he was 80 years old. His cause of death was respiratory failure from pulmonary fibrosis with congestive heart failure.

Legendary screen presence Marlon Brando performed for more than 50 years and is famous for such films as A Streetcar Named Desire and The Godfather.
Marlon Brando was born April 3, 1924, in Omaha, Nebraska. After early promise in the 1940s and '50s, including a legendary performance in the film version of A Streetcar Named Desire, Brando's film career had more downs than up until his starring role in The Godfather. Later, he received huge salaries for small parts. He became known for self-indulgence but was always respected for his finest work.

Brando's notoriety, his troubled family life, and his obesity attracted more attention than his late acting career. He gained a great deal of weight in the 1970s and by the early to mid-1990s he weighed over 300 pounds (140 kg) and suffered from Type 2 diabetes. He had a history of weight fluctuation throughout his career that, by and large, he attributed to his years of stress-related overeating followed by compensatory dieting. He also earned a reputation for being difficult on the set, often unwilling or unable to memorize his lines and less interested in taking direction than in confronting the film director with odd demands.
He also dabbled with some innovation in his last years. He had several patents issued in his name from the U.S. Patent and Trademark Office, all of which involve a method of tensioning drumheads, in June 2002 – November 2004. (For example, see U.S. Patent 6,812,392 and its equivalents).
In 2004, Brando recorded voice tracks for the character Mrs. Sour in the unreleased animated film Big Bug Man. This was his last role and his only role as a female character.
The actor was a longtime close friend of entertainer Michael Jackson and paid regular visits to his Neverland Ranch, resting there for weeks at a time. Brando also participated in the singer's two-day solo career 30th-anniversary celebration concerts in 2001, and starred in his 13-minute-long music video, "You Rock My World," in the same year. On Jackson's 30th anniversary concert, Brando gave a rambling speech to the audience on humanitarian work which received a poor reaction and was unaired.
The actor's son, Miko, was Jackson's bodyguard and assistant for several years, and was a friend of the singer. He stated, "The last time my father left his house to go anywhere, to spend any kind of time ... was with Michael Jackson. He loved it ... He had a 24-hour chef, 24-hour security, 24-hour help, 24-hour kitchen, 24-hour maid service." "Michael was instrumental helping my father through the last few years of his life. For that I will always be indebted to him. Dad had a hard time breathing in his final days, and he was on oxygen much of the time. He loved the outdoors, so Michael would invite him over to Neverland. Dad could name all the trees there, and the flowers, but being on oxygen it was hard for him to get around and see them all, it's such a big place. So Michael got Dad a golf cart with a portable oxygen tank so he could go around and enjoy Neverland. They'd just drive around—Michael Jackson, Marlon Brando, with an oxygen tank in a golf cart."
In April 2001, Brando was hospitalized with pneumonia.
In 2004, Brando signed with Tunisian film director Ridha Behi and began pre-production on a project to be titled Brando and Brando. Up to a week before his death, he was working on the script in anticipation of a July/August 2004 start date. Production was suspended in July 2004 following Brando's death, at which time Behi stated that he would continue the film as an homage to Brando, with a new title of Citizen Brando.
On July 1, 2004, Brando died of respiratory failure from pulmonary fibrosis with congestive heart failure at the UCLA Medical Center. The cause of death was initially withheld, with his lawyer citing privacy concerns. He also suffered from failing eyesight caused by diabetes and liver cancer. Shortly before his death and despite needing an oxygen mask to breathe, he recorded his voice to appear in The Godfather: The Game, once again as Don Vito Corleone. However, Brando only recorded one line due to his health and an impersonator was hired to finish his lines. Some lines from his character were directly lifted from the film.
Karl Malden—a fellow actor in A Streetcar Named Desire, On the Waterfront, and One-Eyed Jacks (the only film directed by Brando)—talks in a documentary accompanying the DVD of A Streetcar Named Desire about a phone call he received from Brando shortly before Brando's death. A distressed Brando told Malden he kept falling over. Malden wanted to come over, but Brando put him off, telling him there was no point. Three weeks later, Brando was dead. Shortly before his death, he had apparently refused permission for tubes carrying oxygen to be inserted into his lungs, which, he was told, was the only way to prolong his life.
Brando was cremated, and his ashes were put in with those of his childhood friend, comedian and actor Wally Cox and another longtime friend, Sam Gilman. They were then scattered partly in Tahiti and partly in Death Valley. In 2007, a 165-minute biopic of Brando for Turner Classic Movies, Brando: The Documentary, produced by Mike Medavoy (the executor of Brando's will), was released.