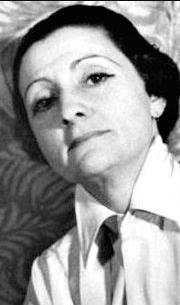 Mercedes de Acosta was an American poet, playwright, and novelist. Four of de Acosta's plays were produced, and she published a novel and three volumes of poetry. She was professionally unsuccessful but is known for her many lesbian affairs with famous Broadway and Hollywood personalities and numerous friendships with prominent artists of the period.