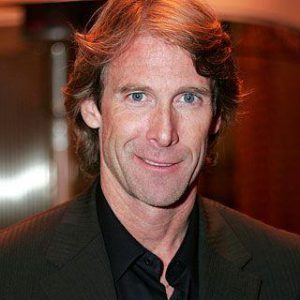 Michael Bay Film Director - Born 17 Feb 1965 - Biography by Lucia Bozzola [-] With his knack for staging visually flashy blockbuster mayhem, Michael Bay became the commercial leader among a new, 1990s generation of advertising-and-MTV-bred directors. Hollywood to the core, Bay has claimed that he was the illegitimate child of a popular director of the 1970s -- although he won't reveal who -- and was given up for adoption at birth. Raised in Los Angeles, he spent his childhood staging Super-8 action movies. He studied film at Wesleyan University and the Pasadena Arts Center, where a Coke commercial he shot as a student project attracted offers to make the real thing. His Coke, Nike, Budweiser, and award-winning "Got Milk?" ads resulted in a 1994 Director's Guild nomination for Best Commercial Director. He was then tapped by producers Don Simpson and Jerry Bruckheimer to make the kind of slick escapism that defined their 1980s heyday; Bay's directorial debut, Bad Boys (1995), became a star-maker for Will Smith and Martin Lawrence.Bay made his movie name with his second feature, The Rock (1996). While the lead trio of Sean Connery, Nicolas Cage, and Ed Harris lent a modicum of class to the over-the-top story concerning treason and Alcatraz, Bay's rapid edits, mobile camera, multi-colored lighting effects, and extreme camera angles never let the narrative energy flag. Popular beyond expectations, The Rock remade the idiosyncratic Cage into a 1990s action star and put Bay on the directorial A-list. Bay's third film, Armageddon (1998), proved that The Rock was no commercial fluke. Although it was the second "asteroid" movie in three months, Armageddon's adrenalized, effects-laden exploits and a cast mixing veterans with hip newcomers turned it into one of the summer's top hits.Armageddon's success set the stage for a bigger, more ambitious, and far more expensive Bay film the next time out: 2001's historical epic/action hybrid Pearl Harbor. Aiming to out-Titanic Titanic, Bay took the events of December 7, 1941, and grafted them onto a fictional love triangle as vapid as it was implausible. The film's budget -- at the time, it was rumored to be the most expensive production ever -- assured that its 40-minute recreation of the 90-minute bombing would indeed be spectacular (in a hyper-edited, Bay sort of way). Unsurprisingly, critics eviscerated the film. But, despite a huge Memorial Day weekend opening and a by other standards large 198 million dollars in U.S. grosses, the public didn't respond to Pearl Harbor, either, and it failed to become the mega-blockbuster it was designed to be.In the next few years, Bay returned to the franchise that made his name, reuniting Will Smith and the errant Martin Lawrence for the predictably profitable (if surprisingly overlong) Bad Boys II. However, venturing outside of his tough-guys comfort zone for the futuristic sci-fi thriller The Island in 2005, Bay experienced his first true flop. The film combined two stars whose ability to open a picture had not yet been tested -- Ewan McGregor and Scarlett Johansson -- and a premise that seemed more Logan's Run than The Matrix. Bay's dystopian, clones-on-the-run vision came and went in America, although it had better staying power in the worldwide market, where its stars had more influence.Bay augmented his career by producing a string of slick, profitable horror remakes (The Hitcher, The Texas Chainsaw Massacre, and its prequel) as he geared up for a remake of his own, bringing the venerable animated kid's show The Transformers to the big screen in 2007. It was such a box-office behemoth that he would make numerous sequels to the project over the next few years. While those would take up the majority of his directorial duties, Bay continued to work as producer on horror film remakes of classics like Friday the 13th and A Nightmare on Elm Street.