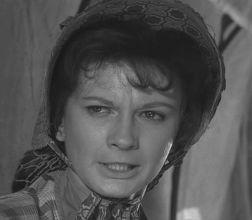 Miranda passed away on February 12, 1973 at the age of 38 in Kinston, North Carolina, USA. Miranda's cause of death was brain tumor.

Miranda Jones was born on April 14, 1934 in North Carolina, USA. She was an actress, known for Have Gun - Will Travel (1957), The Twilight Zone (1959) and State Trooper (1956). She was married to Robert Webber. Robert Laman Webber (October 14, 1924 – May 19, 1989) was an American actor. He appeared in dozens of films and television series, roles that included Juror No. 12 in the classic 1957 film 12 Angry Men.
Have Gun – Will Travel is an American Western series that was produced and originally broadcast by CBS on both television and radio from 1957 through 1963. The television version of the series was rated number three or number four in the Nielsen ratings every year of its first four seasons, and it is one of the few shows in television history to spawn a successful radio version. That radio series debuted November 23, 1958, more than a year after the premiere of its televised counterpart.

State Trooper is an American crime drama set in the American West of the 1950s, starring Rod Cameron as Rod Blake, an officer of the Nevada Department of Public Safety. The series aired 104 episodes in syndication from 1957 to 1959.