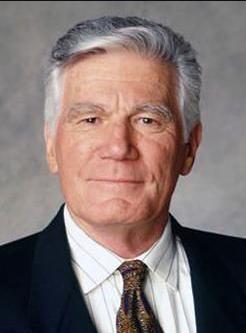 Mitchell is alive and kicking and is currently 94 years old.
Please ignore rumors and hoaxes.
If you have any unfortunate news that this page should be update with, please let us know using this .

Mitchell Ryan (born January 11, 1928) is an American film, television, and stage actor, who in his six decades of television is known for playing Burke Devlin in the 1960s gothic soap opera Dark Shadows, and later for his co-starring role as Thomas Gibson's free-spirited father Edward Montgomery on Dharma & Greg. He also played the villainous General Peter McAllister in the 1987 buddy cop action film, Lethal Weapon.
Ryan appeared in NBC's The A-Team episode "Waste 'Em", as Grant Everett in the two-part Silk Stalkings episode "Partners", and as Kyle Riker, the father of Commander William Riker, in the Star Trek: The Next Generation episode "The Icarus Factor"; Ryan had earlier been considered for the part of series lead Captain Jean-Luc Picard.

He also portrayed the roles of the abusive boyfriend of Blanche Deveraux in The Golden Girls and a police officer in a 1993 episode of NYPD Blue. That same year, Ryan was Dallas Shields in Renegade. In 1994, he appeared in the television movie, Hart to Hart: Home Is Where the Hart Is, and in 1995, he appeared in Judge Dredd and Halloween: The Curse of Michael Myers as Dr. Terence Wynn (played by Robert Phalen in the original Halloween film).
Ryan married Lynda Morse in 1972. They later divorced. The couple had three children.