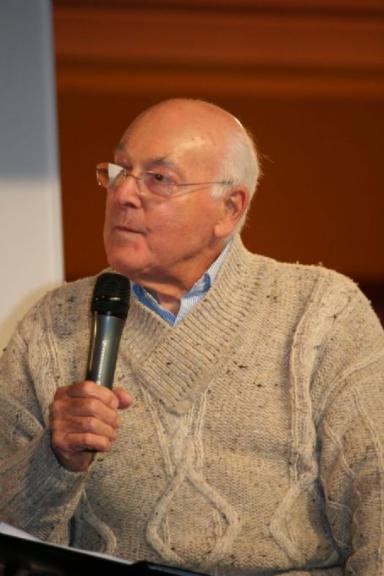 Murray passed away on March 13, 2021 at the age of 97 in Fordingbridge, Hampshire, England.

Graeme Murray Walker, OBE (born 10 October 1923), known as Murray Walker, is a semi-retired English Formula One motorsport commentator and journalist. For most of his career he worked for the BBC, but when it lost the contract for Formula One coverage to ITV, he continued commentating after the change of broadcaster.
Walker was born Graeme Murray Walker at 214 Reddings Lane in Hall Green, Birmingham, England on 10 October 1923. His father Graham Walker was a despatch rider and works motorcyclist for the Norton Motorcycle Company, who participated in the Isle of Man TT. His mother, Elsie Spratt, was the daughter of Harry Spratt, a businessman from Leighton Buzzard, Bedfordshire. In 1925 Walker and his family moved to Wolverhampton when Graham became the Competition Manager for Sunbeam. The family later moved to Coventry in 1928, when Graham worked as the Sales and Competition Director for Rudge-Whitworth.

In 2016 Walker moved with many other BBC F1 staff to Channel 4 to present a range of 1:1 interviews with the sport's key players. Walker also provides continuity announcements to F1 programming and races. Walker withdrew from Channel 4's commentary British Grand Prix coverage due to ill health but appeared in recorded features. In September Channel 4 began broadcasting uncut versions of the interviews under Murray Meets...