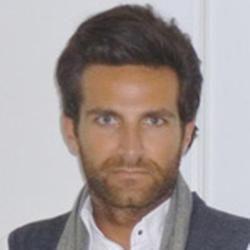 Nicolas is alive and kicking.
Please ignore rumors and hoaxes.
If you have any unfortunate news that this page should be update with, please let us know using this .

Nicolas-Henri Bozzi is an actor, account manager, model manager and real estate agent, owner of the agency Gotha Real Estate, specialized in exclusive properties. He lives between Paris and Marseille in the south of France. His stunning resemblance with the actor Bradley Cooper often led him to amusing and unexpected situations in real life. When Anne Christine Caro offered him the part of Lucas, Nicolas-Henri Bozzi jumped at the chance of being part of the adventure.
Nicolas Bozzi is an actor, known for We Cannes (2017) and Merci beaucoup Bradley Cooper (2013).

Bradley Charles Cooper (born January 5, 1975) is an American actor and filmmaker. He has been nominated for many awards, including four Academy Awards, two Grammy Awards, and a Tony Award. Cooper appeared in Forbes Celebrity 100 on two occasions and Time's list of 100 most influential people in the world in 2015. His films have grossed $7.8 billion worldwide and he was named one of the world's highest-paid actors for three years.