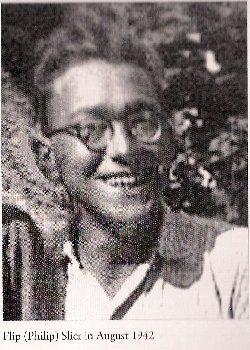 Philip passed away on April 9, 1943 at the age of 19 in Sobibor extermination camp. Philip's cause of death was gassed.

Philip Slier was a Jewish Dutch typesetter who lived in Amsterdam during the German occupation of the Netherlands in World War II. Slier left documentation of his experiences as a forced labourer in the Molengoot labor camp in a series of 86 letters that he wrote to his parents between April and September 1942. His family concealed his letters in their Amsterdam house, where they were discovered more than 50 years later.