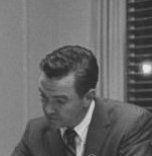 Richard Clayton (June 12, 1915 – September 29, 2008) was an American actor who became a talent agent. He repped for such high-profile talent as Jane Fonda, James Dean and Burt Reynolds during his career as an agent.