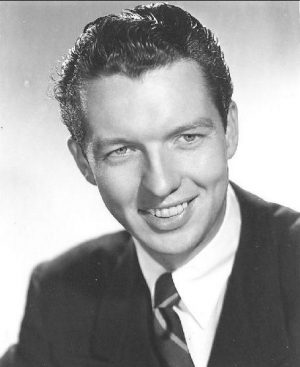 Robert passed away on August 13, 1983 at the age of 70 in Lancaster, California, USA. Robert's cause of death was acute arteriosclerosis and heart disease.

Robert Bailey was born on June 13, 1913 in Toledo, Ohio, USA. He was an actor, known for Jitterbugs (1943), The Dancing Masters (1943) and Wing and a Prayer (1944). He died on August 13, 1983 in Lancaster, California, USA.Trivia (2)Well known old time radio personality. Famous for title role in "Yours Truly, Johnny Dollar".Portrayed detective George Valentine on Mutual Radio's "Let George Do It" (1946-1954).Bob Bailey (born Robert Bainter Bailey, June 13, 1913 in Toledo, Ohio – August 13, 1983) was an American actor who performed mostly on radio.One of Bailey's earliest roles on radio was that of the title character in the comedy serial Mortimer Gooch (1936-1937) on CBS.:366 In the early 1940s Bailey was regularly featured on network radio programs originating from Chicago. He played the boyfriend of the title character's sister in That Brewster Boy and the father of the title character in Meet Corliss Archer. He also had the role of Bob Jones in Kitty Keene, Inc..He was signed by 20th Century-Fox and appeared in seven feature films; the first two (in which he was most prominent) starred Laurel and Hardy.Starting in 1946, Bailey starred as freelance detective George Valentine in the radio drama Let George Do It. but he is best remembered as the title character in the long-running radio series Yours Truly, Johnny Dollar. The program ran from 1949 until 1962 (it and Suspense were the last CBS radio drama series on the air until the CBS Radio Mystery Theater began in 1974) and featured the exploits of "America's fabulous freelance insurance investigator"; Bailey starred as Johnny from 1955 through 1960 and wrote the script for the December 22, 1957 episode "The Carmen Kringle Matter" using the pen name "Robert Bainter".When Yours Truly, Johnny Dollar relocated to New York in 1960 to reduce costs and make more money available for television, CBS dumped Bailey. Having performed in almost five hundred episodes, he had made the role his own. With the end of his involvement, the show would wind down over the following two years before being taken off the air in 1962, by which time Bailey had virtually given up acting. Near the end of the 1962 film Birdman of Alcatraz, he can be seen as one of the reporters gathered around Burt Lancaster and Edmond O'Brien; O'Brien had portrayed Johnny Dollar on the radio from 1950 to 1952.Bailey struggled with alcoholism as his health declined, but did recover toward the end of his life. He died in California at age 70 on August 13, 1983.