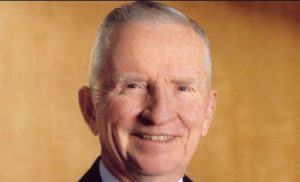 Perot was born on June 27, 1930, in Texarkana, Texas, to an impoverished family. He started working various odd jobs at age 7. In 1949, Perot was admitted to the United States Naval Academy (serving in several positions, including class president). Upon his graduation in 1953, he was commissioned as a Naval officer and served on a destroyer and aircraft during the Korean War for four years. In 1956, Perot married Margot Birmingham. In 1957, he was honorably discharged from the Navy and started to work for IBM as a salesman.
In 1962, Perot started his own business, Electronic Data Systems, with money given to him by his wife. Today, the company is worth billions of dollars and has more than 70,000 employees. Perot has worked closely with the U.S. government over the past three decades, helping to conduct several rescue missions and prisoner negations with foreign nationals. In 1992, he split from the Republican Party to create the Reform Party. He lost the election then and again in 1996. He remains a philanthropist and often donates to charity. He and his wife have five children and nine grandchildren.

Perot and his wife Margot (née Birmingham), a graduate of Goucher College, had five children (Ross Jr., Nancy, Suzanne, Carolyn, and Katherine). He left 19 grandchildren. With an estimated net worth of about US$4.1 billion in 2019, he was ranked by Forbes as the 167th-richest person in the United States.
Perot died on July 9, 2019, less than two weeks after his 89th birthday in Dallas, Texas, from leukemia. He was buried at the Sparkman-Hillcrest Memorial Park Cemetery and a memorial service was held at Highland Park United Methodist Church, with 1,300 invited guests.