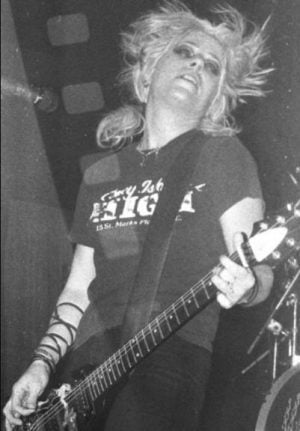 Suzi is alive and kicking and is currently 62 years old.
Please ignore rumors and hoaxes.
If you have any unfortunate news that this page should be update with, please let us know using this .

Suzanne "Suzi" Gardner (born August 1, 1960 Sacramento, California) is an American musician most notable for being a guitarist and vocalist of L7, an all-female band in the 1990s. Before playing with L7, Suzi wrote for LA Weekly. She co-founded the group together with Donita Sparks. Along with appearing on all six L7 studio albums, Gardner also provided guest vocals on the Black Flag song "Slip It In" on their 1984 release of the same title.