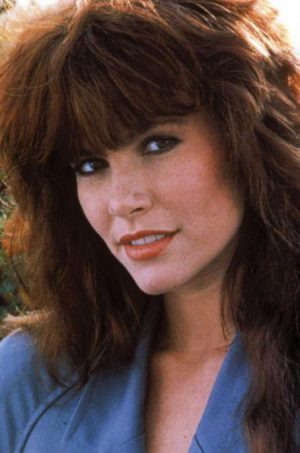 Julie E. "Tawny" Kitaen is an American actress and media personality. Kitaen appeared in several videos in the 1980s for the band Whitesnake, including the hit "Here I Go Again", and "Is This Love". Kitaen was married to Whitesnake lead singer David Coverdale from 1989 to 1991 and to baseball player Chuck Finley from 1997 to 2002. She began an acting career and co-starred as Tom Hanks' fiancé in 1984's Bachelor Party and had recurring parts on multiple television series such as Hercules: The Legendary Journeys and co-hosted America's Funniest People from 1992-1994.
Kitaen dated Ratt guitarist Robbin Crosby during and after high school. She followed the bands to Los Angeles in the late 1970s to pursue a career of her own. Kitaen married Whitesnake singer David Coverdale in 1989. Coverdale and Kitaen divorced in 1991.

Kitaen was married to baseball player Chuck Finley from 1997 to 2002. In 2002, she was charged with domestic violence for an incident involving Finley, whom she had kicked in the face repeatedly with high-heeled shoes. Three days later, Finley filed for divorce. After a plea bargain, Kitaen agreed to "enter a spousal battery counseling program and avoid contact with Finley." The couple had been married for five years and had two daughters together.