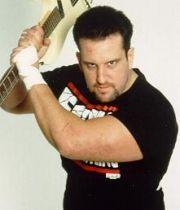 Tom is alive and kicking and is currently 51 years old.
Please ignore rumors and hoaxes.
If you have any unfortunate news that this page should be update with, please let us know using this .

Thomas James "Tom" Laughlin (born February 9, 1972) is an American professional wrestler better known by his ring name Tommy Dreamer. He is currently working for Total Nonstop Action Wrestling (TNA) and various promotions on the independent circuit. He is best known for his time spent with Extreme Championship Wrestling (ECW) and World Wrestling Entertainment (WWE). Among other accolades, he is a fourteen-time WWF/E Hardcore Champion and a two-time world champion, having won the ECW World Heavyweight Champion twice (once in ECW, once in WWE).In addition to his most recent role, Dreamer is known for the time he spent in the Philadelphia-based Extreme Championship Wrestling (ECW) promotion, of which he has been called the "heart and soul". Though he only held the ECW World Heavyweight Championship once in his time with the company – for a total of about 30 minutes – he was regularly embroiled in the company`s most visible angles on-screen and involved in the booking, some of the business decisions, and, like a number of other ECW wrestlers, was part of the day to day operations of the company off-screen.Dreamer married Trisa Hayes, better known by her ring name Beulah McGillicutty, on October 12, 2002, with whom he has twin daughters – Kimberly and Briana.[64] Kimberly and Briana appeared in a sixth season episode, "The Ride", of the HBO drama The Sopranos playing Domenica Baccalieri, Tony Soprano`s baby niece.