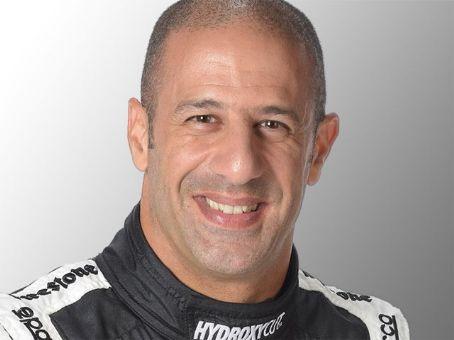 Tony is alive and kicking and is currently 47 years old.
Please ignore rumors and hoaxes.
If you have any unfortunate news that this page should be update with, please let us know using this .

Antoine Rizkallah Kanaan "Tony" Filho, more commonly known as Tony Kanaan, (born December 31, 1974) is a Brazilian racing driver. He has won the 2013 Indianapolis 500 and the 2004 Verizon IndyCar Series championship. That season, he completed 3,305 laps, making him the first IndyCar Series driver to complete every possible lap in a season. He also led 889 laps in 13 separate races to establish an IndyCar Series record. He is also the only driver to lead the Indianapolis 500 in each of his first seven starts, and won his first race on his 12th attempt. This ties him with Sam Hanks for the most attempts to win their first Indianapolis 500. Kanaan has a total of 15 career race wins in the Verizon IndyCar Series. He also has one victory in the Champ Car World Series with his win at the U.S. 500 at Michigan International Speedway. Kanaan has also competed in both the 24 Hours of Daytona and the 12 Hours of Sebring. Kanaan is friends with former IndyCar Series driver Dario Franchitti and previously with Dan Wheldon, who was killed while in the 2011 IZOD IndyCar World Championship at Las Vegas Motor Speedway, a race in which Kanaan was leading from the pole. On the Borg-Warner Trophy (the trophy that features the likeness of each Indianapolis 500 winner), the names of those three drivers all appear on consecutive order as follows: 2010 (Franchitti), 2011 (Wheldon), 2012 (Franchitti), and 2013 (Kanaan). After Franchitti suffered career-ending injuries in a crash with Takuma Sato at the 2013 Shell and Pennzoil Grand Prix of Houston Race #2 at Reliant Park, Kanaan replaced him in the #10 Target-sponsored Dallara DW12-Ilmor-Chevrolet Indy V6 for Target Chip Ganassi Racing beginning in the 2014 season after being originally contracted to drive the #8 NTT Data/TNT Energy Drink-sponsored Dallara DW12-Ilmor-Chevrolet Indy V6 for NTT Data Chip Ganassi Racing. Kanaan would begin to drive for NTT Data Chip Ganassi Racing in the #10 NTT Data-sponsored Dallara DW12-Ilmor-Chevrolet Indy V6 after Target decided to sponsor Scott Dixon.