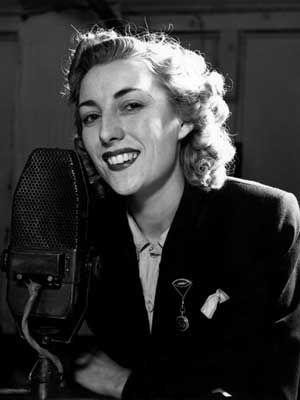 Dame Vera Lynn, DBE (born Vera Margaret Welch; 20 March 1917), widely known as "The Forces' Sweetheart" is an English singer, songwriter and actress whose musical recordings and performances were enormously popular during the Second World War. During the war she toured Egypt, India and Burma, giving outdoor concerts for the troops. The songs most associated with her are "We'll Meet Again", "The White Cliffs of Dover", "A Nightingale Sang in Berkeley Square" and "There'll Always Be an England".
Lynn was awarded the British War Medal 1939–1945 and the Burma Star. She was appointed Officer of the Order of the British Empire (OBE) in the 1969 New Year Honours "for services to the Royal Air Forces Association and other charities", and was advanced to Dame Commander of the Order of the British Empire (DBE) in the 1975 Birthday Honours for charitable services.

In September 2009, at the age of 92, Lynn became the oldest living artist to make it to number 1 in the British album chart. Her compilation album We'll Meet Again: The Very Best of Vera Lynn entered the chart at number 20 on 30 August, and then climbed to number 2 the following week before reaching the top position, outselling both the Arctic Monkeys and the Beatles. With this achievement, she surpassed Bob Dylan as the oldest artist to have a number one album in the UK.
In 1941 Lynn married Harry Lewis, a clarinetist and saxophonist, and fellow member of Ambrose's orchestra whom she had met two years earlier. They had one child, Virginia Penelope Anne Lewis. Her husband died in 1998.