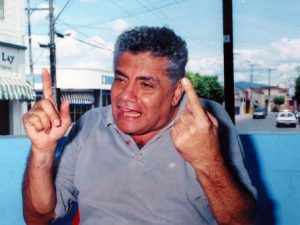 Waly Dias Salomão (September 3, 1943 – May 5, 2003) was a Brazilian poet. He was born in Jequié, Bahia. He acted on several areas of Brazilian culture as poet, songwriter and writer. His first book was “Me segura qu’eu vou dar um troço” in 1972. His last book “Pescados Vivos” was published after his death in 2004. He wrote successful lyrics for Maria Bethânia, Gal Costa, Gilberto Gil and Caetano Veloso.