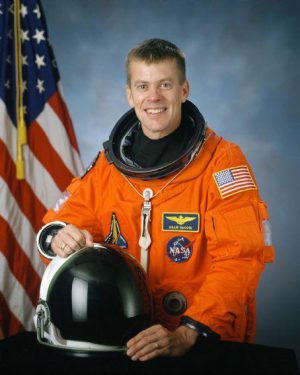 William passed away on February 1, 2003 at the age of 41 in Texas, USA. William's cause of death was aviation accident.

William Cameron "Willie" McCool (September 23, 1961 – February 1, 2003), (Cmdr, USN), was an American naval officer and aviator, test pilot, aeronautical engineer, and NASA astronaut, who was the pilot of Space Shuttle Columbia mission STS-107. He and the rest of the crew of STS-107 were killed when Columbia disintegrated during re-entry into the atmosphere. He was the youngest male member of the crew.
Selected by NASA in April 1996, McCool reported to the Johnson Space Center in August 1996. He completed two years of training and evaluation, and was qualified for flight assignment as a pilot. Initially assigned to the Computer Support Branch, McCool also served as technical assistant to the director of flight crew operations, and worked Shuttle cockpit upgrade issues for the Astronaut Office.

McCool was pilot of Space Shuttle mission STS-107, January 16 to February 1, 2003, logging 15 days, 22 hours and 20 minutes in space. The 16-day flight was a dedicated science and research mission. Working 24 hours a day, in two alternating shifts, the crew successfully conducted approximately 80 experiments. STS-107's mission ended abruptly on February 1, 2003, when Columbia disintegrated during re-entry, 16 minutes before scheduled landing. All seven crew members were killed.
McCool died on February 1, 2003, when Space Shuttle Columbia broke up over the southern United States during re-entry. He was survived by his wife, Lani, and their three sons. He had a home in Anacortes, Washington, at the time of his death. He is buried in Anacortes, Washington.