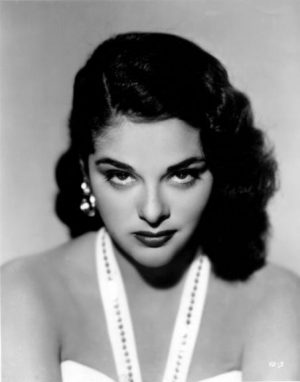 Yvette Duguay (born Audrey L. Pearlman; June 24, 1932- October 14, 1986) was an American actress. She began acting at the age of six months and continued her career well into adulthood, proving to be one of the few child stars of the time to maintain a successful career. Though Duguay’s family originated in Marseilles, France as wine merchants, she was recorded to have been born in Paterson, New Jersey. Her family decided to move out to Hollywood when Duguay was only the age of two, and she would live out the rest of her life there.
Universal-International signed Duguay in July 1951 when she was 19 years old, earning her a weekly salary of $1,250. She portrayed a Native American squaw, Starfire, in the western film Cattle Queen of Montana (1954) that starred future President of the United States Ronald Reagan. It turned out Cattle Queen would be one of her most recognizable roles, but Duguay also portrayed a Native American character, Minnehaha, in another western genre film, Hiawatha (1952), in which she starred opposite Vince Edwards.

Duguay's first husband was Hal Paiss, with whom she had three children, son William C. Paiss, daughter Madeline J. Paiss, and son Matthew D. Paiss. She divorced Paiss in June 1966.
She married John F. Sheeley in Los Angeles in June 1967 and divorced him in October 1972. She married her third husband, Robert C. Anderson, who would survive her, on August 27, 1983.