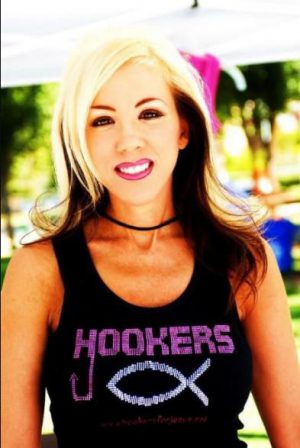 Annie is alive and kicking and is currently 54 years old.
Please ignore rumors and hoaxes.
If you have any unfortunate news that this page should be update with, please let us know using this .

Does Annie Lobert Have the coronavirus?

Annie Lobert is an American former call girl and sex industry worker, who founded the international Christian ministry Hookers for Jesus. In 2010, she produced and starred in a three-part documentary on the organization, titled Hookers: Saved on the Strip, which broadcasted nationwide on cable television's Investigation Discovery.Lobert worked 16 years as a prostitute and escort in Las Vegas, Minneapolis, Minnesota, and Hawaii. She left the sex industry with the support of Al Nakata, one of her regular customers, who had fallen in love with her. After leaving prostitution, Nakata trained her in estimates and service reviews in order to work with him in his Super GT Series auto body and design firm.Annie Lobert was born on September 26, 1967 in Minneapolis, Minnesota. She is the daughter of Chet and Joanne Lobert. She is the youngest of four children, including a sister, Diana, and two brothers, Chuck and Bill. Her sister died in 1995, from Marfan's syndrome. Lobert attended Amery High School in Amery, Wisconsin, graduating in 1985. On June 5, 2009, Lobert married Oz Fox, guitarist of the Christian band Stryper. The ceremony, which took place at The Church at South Las Vegas, was broadcast live on the Internet.Lobert is the president and founder of Hookers for Jesus, an international, Christian faith-based nonprofit organization that addresses prostitution, sex trafficking, and sexual violence and exploitation linked to pornography and the sex industry. In 2008, Hookers for Jesus established a safe house program in the Las Vegas area in partnership with The Church at South Las Vegas. The program, titled "Destiny House", is a safe haven for victims of sex trafficking and primarily serves prostitutes and local sex trade workers. In October 2011, Annie Lobert, along with Hookers For Jesus, ended her affiliation with The Church at South, Las Vegas.In 2006, Lobert began working on a joint media project with Heather Veitch of JCs Girls, entitled "Saving Sex City". However, the project was short lived and as of November 2008, Lobert and Veitch were no longer producing episodes. In March 2009, Lobert participated in a nationally televised informal debate presented by ABC News Nightline that posed the question, "Does Satan Exist?" Other participants in the debate included Carlton Pearson; Deepak Chopra; and Mark Driscoll, pastor of Mars Hill Church in Seattle, where the debate was held. The debate was the third installment of the "Face-Off" series presented by Nightline, following "Does God Exist?" and "America Addicted to Porn?". Lobert has spoken in churches and regional conferences throughout the United States, as well as during news reports and national news magazine programs. Her topics generally include a presentation of her testimony and experiences as a victim of sex trafficking, while sharing an overview of the primary and secondary harmful effects of involvement in the sex industry. As of 2010, Lobert has been involved with MTV EXIT Concerts and The Whosoevers, a rock band and national evangelistic speaking group. During these events, she speaks and shares the story of her life. Taking the name "The Whosoevers" (from John 3:16), the purpose of the group is to "impact those whose pain has previously driven them to addictive or self-destructive behaviors." Regular members and leaders of the group include former Korn member, Brian "Head" Welch; Sonny Sandoval of P.O.D.; Ryan Ries, son of Pastor Raul Ries of Calvary Chapel Golden Springs; and freestyle motocross aerialist Ronnie Faisst. In 2010, Lobert appeared on news programs and talk shows in support of the Investigation Discovery documentary. These programs included NBC's Today Show with Meredith Vieira, and HLN's The Joy Behar Show. Some of the programs and documentaries in which Lobert has appeared or been featured include: Television appearances The 700 Club on Christian Broadcasting Network ABC News Nightline: "The Nightline Face-Off: Does Satan Exist?" ABC News Nightline "Saving Sin City: Hookers for Jesus Target Unlikely Flock" Breakthrough with Rod Parsley Le Droit de Savoir with Charles Villeneuve Enjoying Everyday Life with Joyce Meyer HelpLine TV with Morris Cerullo Investigation Discovery Hookers: Saved on the Strip, three-part documentary, which debuted on December 8, 2010 JCTV Christmas Special with Oz Fox (2008) JCTV Top 3 with Brandon Crouch The Jim Bakker Show with Mark Gungor The Joni Lamb Show Life Today with James and Betty Robison Praise the Lord with Paul Crouch, Jr. on Trinity Broadcasting Network The p*ssycat Preacher, documentary film by Bill Day featuring Heather Veitch Sexy Missionaries, Italian and Swiss documentary film by Leonardo Capella The Tyra Banks Show (various appearances) Radio appearances Lobert has appeared on talk radio and interviewed in major news publications throughout the world, including the Africa, Australia, France, Germany, Japan, Spain, the UK, and the United States.