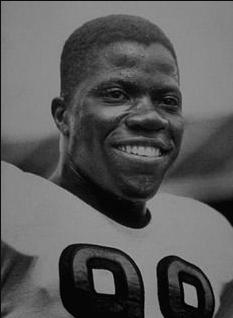 William Karnet Willis (October 5, 1921 – November 27, 2007) was an American football defensive lineman who played eight seasons for the Cleveland Browns in the All-America Football Conference (AAFC) and the National Football League (NFL). Known for his quickness and strength despite his small stature, Willis was one of the dominant defensive football players of the 1940s and early 1950s. He was named an All-Pro in every season of his career and reached the NFL's Pro Bowl in three of the four seasons he played in the league. His techniques and style of play were emulated by other teams, and his versatility as a pass-rusher and coverage man influenced the development of the modern-day linebacker position. When he retired, Cleveland coach Paul Brown called him "one of the outstanding linemen in the history of professional football". Willis was also one of the first African Americans to play professional football in the modern era, signing with the Browns a year before Jackie Robinson broke the color barrier in Major League Baseball with the Brooklyn Dodgers.