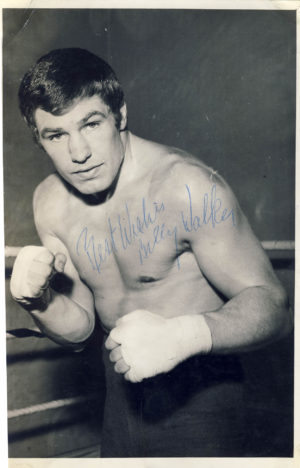 Billy is alive and kicking and is currently 83 years old.
Please ignore rumors and hoaxes.
If you have any unfortunate news that this page should be update with, please let us know using this .

William (Billy) Walker (Stepney, London, 3 March 1939) is a British, retired heavyweight boxer and actor. He was born in London in 1939 and turned professional in 1961 after 39 amateur bouts. His nickname was "Golden Boy". His professional record was 21 wins (16 by knockout), 8 losses and 2 draws. During 1967, he fought for both the British and European titles, losing to Henry Cooper (Great Britain) and Karl Mildenberger (West Germany) respectively. After he retired from the ring in 1969 he appeared in several British films and TV shows. His autobiography "When the Gloves Came Off" ISBN 978-1-86105-970-3 was published in 2007.
During World War II, his father served in the Royal Air Force and the boys lived with their mother in Bedfordshire, and later in Ilford, Essex. He left school at 16 and started working in the printing business. Later a friend introduced him to a more highly paid job as a porter in London's historic Billingsgate Fish Market. He was also a bouncer and part-time DJ at the Ilford Palais dance hall which was managed by Jimmy Savile at the time. He joined a West Ham boxing club to keep fit, and was eventually persuaded to spar with other members and found that he had the talent to box competitively.

With brother George as his manager, Walker embarked on a professional career that in six years would see him challenging for both the British and European titles. With his curly blond hair, boyish good looks and all action style the public flocked to see his fights. George invested the purses in a string of night clubs and restaurants and soon the brothers were rich. Billy Walker moved to London's West End and mixed with society's elite. On one occasion he was presented to the Queen, who told him that she enjoyed watching his fights.[citation needed] This was during London's "swinging sixties" and Walker took full advantage of his wealth, fame and good looks to have fun[vague] with a series of beautiful women.[citation needed] Although he never fought in the US, during his career he stopped rated American heavyweights Charlie Powell, Bowie Adams, Ray Patterson and Thad Spencer inside the distance. In spite of a few weeks' coaching at Harry's Gym in Harlem, Walker's defensive skills remained marginal, and some of his later fights against world class opponents had to be stopped owing to cuts and excessive bleeding from his nose. In 1969 at the age of 30 he retired from the ring, a very wealthy[vague] young man.