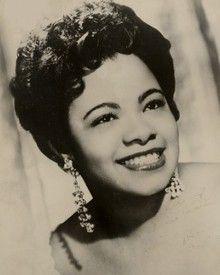 Bonnie DavisReal Name:Melba SmithProfile:Bonnie Davis (June 10, 1920 - August 1976), was an American R&B singer most popular in the 1940s. She was born Melba Smith in Bessemer, Alabama, and initially planned to become a school teacher. However, in the late 1930s she started working as a singer in New York, initially in saxophonist Teddy Hill's band. She and Hill had a daughter together, who was born Beatrice Hill (born October 29, 1945 in New York City) and later became the singer Melba Moore. On March 6, 1943, she had a # 1 R&B hit with "Don't Stop Now", which was credited to Bonnie Davis and the Bunny Banks Trio, apparently in order to circumvent union rules during a musicians' strike. The recording also featured pianist Clement Moorman, whom Davis later married. Davis and Moorman continued to perform together in clubs as a duo as late as the 1970s, before her death in 1976 in New Jersey.