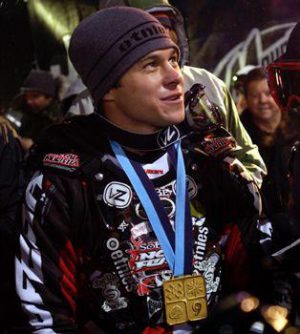 Brian is alive and kicking and is currently 47 years old.
Please ignore rumors and hoaxes.
If you have any unfortunate news that this page should be update with, please let us know using this .

Brian Deegan (born May 9, 1975) is an American professional Freestyle Motocross rider and a founding member of the Metal Mulisha. Deegan was the first ever to do a 360 in competition; he named the trick the "Mulisha Twist". He is the most decorated Freestyle Motocross rider in X Games history. With 10 total medals (3 Golds and 7 Bronzes), he is the only rider to compete in at least 1 event in every X Games. He became a born again Christian after a near fatal crash in 2005.
In 2011, he won the World Championship race at Crandon International Off-Road Raceway in the Traxxas TORC Series. He also competed at the Race of Champions. He also won the championships in the Pro Lite Unlimited and Pro 2 classes of the Lucas oil Off Road Racing Series. In 2012, he debuted the Metal Mulisha Monster truck. Todd LeDuc officially debuted it at Reliant Stadium in Houston, Texas in January 2012. Deegan himself drove the truck in Phoenix, Arizona at Chase Field. He was scheduled to drive the truck at the Monster Jam World Finals 13, but injured himself in driving practice. Todd LeDuc replaced him. He also won his second championship in the Pro 2 class of the Lucas Oil Off Road Racing Series.

Deegan raced an OlsbergsMSE Ford Fiesta at the Global RallyCross Championship, resulting runner-up in 2012, fourth in 2013 and 12th in 2014. He also continued his Lucas Oil Off Road Racing Series career, winning the Pro Light Unlimited championship in 2013 and the Pro 2 championship in 2014. In 2015, Deegan was hired by Chip Ganassi Racing to compete in seven Global Rallycross Championship races in an M-Sport Fiesta along with former professional motocross rider Jeff Ward.
Deegan's daughter, Hailie, also competed in the Lucas Oil Off Road Racing Series. She was a NASCAR Drive for Diversity member in 2016 and is a member of the 2017–18 NASCAR Next program. She currently drives the No. 19 Toyota Camry for Bill McAnally Racing full time in the NASCAR K&N Pro Series West and part time in the NASCAR K&N Pro Series East.