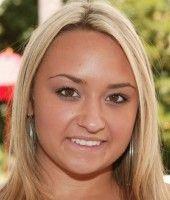 Carmella is alive and kicking and is currently 35 years old.
Please ignore rumors and hoaxes.
If you have any unfortunate news that this page should be update with, please let us know using this .

Carmella Crush (born February 2, 1987, in Mechanicsville, Virginia, US) is a retired American adult movie star who was active between 2006 and 2009. Crush grew up in Mechanicsville. After graduating Hanover High School in 2005, she worked her way to Florida where she entered to the industry in January of 2006.
She spent almost three years in the world of adult entertainment and managed to become very popular before retiring in 2009. Carmella Crush is a divine seductress with a flawless 38D-24-34. She is 5 feet and 4 inches tall and weighs no more than 120 lbs so she's rather petite. The brown eyed nymph decided to film her first explicit scene in 2006, soon after she turned eighteen. She was born as Ashley Holloway in Mechanicsville, Virginia on February 28, 1988, under the star sign of Pisces.