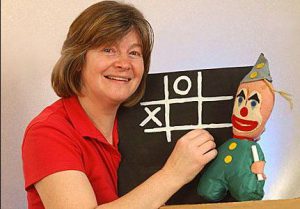 Carole is alive and kicking and is currently 64 years old.
Please ignore rumors and hoaxes.
If you have any unfortunate news that this page should be update with, please let us know using this .

Carole Hersee (born 25 November 1958 in Redhill, Surrey) is a costume designer who is best known for appearing in the centrepiece of the iconic United Kingdom television Test Card F (and latterly J, W, and X), which aired on BBC Television from 1967 to 1998. As such she became the most aired face in British television history.
Because of the card's prolonged exposure on the BBC, Hersee received fan mail during her teenage years and was regularly contacted by media outlets for interviews, but she quickly tired of the publicity. According to a November 2006 article featuring test card enthusiast Keith Hamer, Hersee is in Guinness World Records for the longest television appearance in history — an estimated total of 70,000 hours, equivalent to nearly eight continuous years. However, she denied this in a May 2007 interview with The Daily Telegraph, saying, "[It] can't be put in the Guinness Book of Records because it isn't a record that somebody else can achieve, apparently". Hersee still owns the Bubbles doll, which she today keeps stored inside a box.

Hersee attended Heath End School in Farnham, and as an adult became a seamstress for a supplier of theatrical costumes. She has designed costumes for several West End theatre productions and films, including The Last Emperor, Flash Gordon and Dangerous Liaisons.
On the 2006–2007 television series Life on Mars, Hersee was depicted as a fictional character called the Test Card Girl, played by Rafaella Hutchinson in series one and by Harriet Rogers in series two. Appearing to the protagonist in brief visions, she would often taunt Sam Tyler (John Simm) and occasionally scare him greatly. She is the final character seen in the series when she mimes turning a switch at the side of the screen and the image disappears, similar to an old television set.