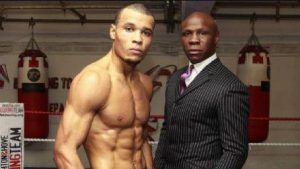 Chris is alive and kicking and is currently 33 years old.
Please ignore rumors and hoaxes.
If you have any unfortunate news that this page should be update with, please let us know using this .

Christopher Livingstone "Chris" Eubank, Jr. (born 18 September 1989) is a British professional boxer and former WBA interim middleweight champion. The son of former world champion Chris Eubank, he is known for his speed, athleticism, explosive power and great stamina. As of December 2015 he is ranked by BoxRec as the #2 middleweight in the UK, while The Ring ranks him as the #8 middleweight in the world.