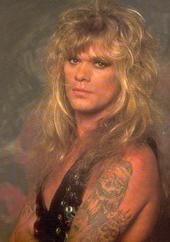 Chris is alive and kicking and is currently 63 years old.
Please ignore rumors and hoaxes.
If you have any unfortunate news that this page should be update with, please let us know using this .

Does Chris Holmes Have the coronavirus?

Christopher John Holmes, born June 23, 1958 in Glendale, California, is a heavy metal guitarist and songwriter who grew up in La Canada, California. Holmes started his musical career in the Pasadena, California area in the late 1970s and early 1980s. He is best known as the lead guitarist of heavy-metal band W.A.S.P. Together with Blackie Lawless and Randy Piper, he was one of the founding members of the band. Holmes was a member of W.A.S.P. first from 1982 to 1990, and again from 1996 to 2001.
Prior to meeting Blackie Lawless and Randy Piper, and joining W.A.S.P., Holmes played guitar with Los Angeles bands Buster Savage, LAX, and Slave. Holmes joined W.A.S.P. in 1982, and remained with the group until 1990. In 1996 Holmes rejoined W.A.S.P., and remained lead guitarist until 2001. Holmes has not played with W.A.S.P. since.

While a member of W.A.S.P., Holmes participated in the filming of the documentary film, The Decline of Western Civilization Part II: The Metal Years. The film included interviews with many well known heavy metal personalities of the era discussing their lifestyle and the metal scene in late 1980s Los Angeles.
Holmes' contribution to the 1988 documentary is perhaps the most memorable, as he was interviewed while floating in a swimming pool, fully clothed and visibly quite intoxicated while his mother sat poolside. The interview stood out in stark contrast to the more light-hearted and humorous interviews conducted by director Penelope Spheeris, which mostly portrayed rockers as good-natured, though often dimwitted or deluded, party animals. During the interview, Holmes smiled drunkenly at the camera, deeming himself "a full-blown alcoholic" and "a piece of crap" despite his band's success, and punctuated his remarks by guzzling from three bottles of vodka. At the end of the interview, Holmes upends a full bottle of Smirnoff over his head as he rolls out of his inflatable chair and into the water.
Chris Holmes has been married three times. His first marriage was to Kaylen Rodgers in the late 1980s. He was briefly wed to Lita Ford in the early 1990s. He is now married to Catherine Sarah Holmes, whom he wed in 2012. The couple currently resides in Cannes, France.