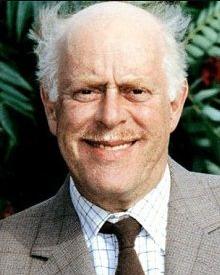 Clive Walter Swift is an English actor and songwriter. He is best known for his role as Richard Bucket in the British television series Keeping Up Appearances, but has played many other notable film and television roles, including that of Roy in the British television series The Old Guys. Swift was born in Liverpool, the son of Lily Rebecca (née Greenman) and Abram Sampson Swift. His elder brother, David, was also an actor. Both were educated at Clifton College and Gonville and Caius College, Cambridge, where Clive read English literature. He was previously a teacher at LAMDA and the Royal Academy of Dramatic Art. His family were Jewish.
During the 1970s, he appeared as Doctor Black in two of the BBC's M. R. James adaptations: The Stalls of Barchester and A Warning to the Curious. He is best known for his role on Keeping Up Appearances as Richard Bucket, the long-suffering husband of Hyacinth. Swift starred in the BBC adaptation of The Barchester Chronicles and appeared in the Doctor Who story Revelation of the Daleks. On 25 December 2007, he appeared in a Doctor Who Christmas special as Mr Copper. He also played Sir Ector, the adoptive father of King Arthur in John Boorman's 1981 film Excalibur.

Swift was married to novelist Margaret Drabble (1960–75). He was the father of one daughter, Rebecca (who died in April 2017), known for running The Literary Consultancy in London, and two sons, Adam Swift, an academic, and Joe Swift, a TV gardener.