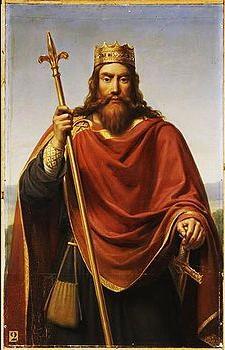 Clovis I Birthday and Date of Death

Clovis (c. 466–511) (Ch-)Leuthwig (Ludwig, Louis) was the first King of the Franks to unite all the Frankish tribes under one ruler. He was also the first Catholic King to rule over Gaul (France). He was the son of Childeric I and Basina. In 481, when he was fifteen, he succeeded his father. The Salian Franks were one of two Frankish tribes who were then occupying the area west of the lower Rhine, with their center in an area known as Toxandria, between the Meuse and Scheldt (in what is now the Netherlands and Belgium). Clovis's power base was to the southwest of this, around Tournai and Cambrai along the modern frontier between France and Belgium. Clovis conquered the neighboring Salian Frankish kingdoms and established himself as sole king of the Salian Franks before his death. The small church in which he was baptized is now named Saint-Remi, and a statue of him being baptized by Saint Remigius can be seen there. Clovis and his wife Clotilde are buried in the St. Genevieve church (St. Pierre) in Paris. An important part of Clovis's legacy is that he reduced the power of the Romans in 486 by beating the Roman ruler Syagrius in the battle of Soissons.