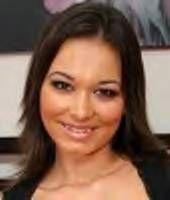 Crissy Moon was born Lindsay Noel Anderson on July 28, 1984 in Bakersfield, California. If you’re thinking that the lovely Crissy Moon has an exotic, almost Asian look, you’re exactly right. While her mother’s side of the family is from Arkansas and, as Crissy puts it, “kind of Southern,” Crissy is one quarter Japanese thanks to her native Japanese paternal grandmother.
Crissy first began performing in explicit hardcore fare in her early twenties in 2006. Among the notable companies and adult websites that Moon worked for are Hustler, 3rd Degree, Sin City, Devil's Film, Pink Visual, Anal Ultra, Evil Angel, Sudden Impact, Red Light District, SunLust Pictures, New Sensations, Zero Tolerance, and Intersec Interactive. Moreover, Crissy was nominated for AVN Awards in 2009.

She has a massage therapy license, and she was working as a massage therapist in a chiropractor’s office before getting into the industry in 2006. At some point, Crissy wants to take more classes in massage and even open her own spa or salon.