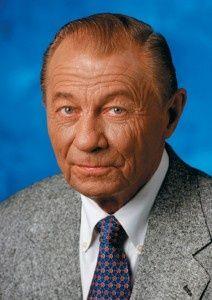 Dan Cook was my neighbor and my friend, besides being the greatest sportswriter in these parts. He is sorely missed by all that knew him ... Mr. Broadhind as his alter ego was known.Bio by WDW/FIX HalfgoofyDaniel John "Dan" Cook, Jr. (August 12, 1926 – July 3, 2008) was a sports writer for the San Antonio Express-News, where he worked for 51 years. He is most notable for popularizing the phrase "the opera ain't over 'til the fat lady sings." Described as a "sports icon", Cook also was a sports anchor at San Antonio television station KENS from 1956 to 2000. For most of these years, the TV station was owned by the San Antonio Express-News.CareerAfter beginning his sportswriting career at the Houston Post, Cook worked at the San Antonio Express-News from August 14, 1952 until he retired on August 3, 2003. In early 1956, he first made national headlines when, acting on a tip, he confronted a suspect in a Houston robbery and in the process wound up himself arrested and charged with armed robbery. (He would later be exonerated when the suspect confessed to the original crime.) Cook wrote his first sports column for the San Antonio Express-News on November 29, 1956. In addition to his newspaper and television duties, he wrote six columns per week, and had two sports telecasts and two radio commentaries daily. He also served as the Express-News' executive sports editor from 1960 to 1975.The phraseHe first said the phrase "the opera ain't over until the fat lady sings" on a 1978 newscast discussing the NBA playoff series between the San Antonio Spurs and the Washington Bullets. The phrase was then attributed to Bullets coach Dick Motta, who had borrowed it during Washington's successful 1978 title run.The Yale Book of Quotations later concluded that it first appeared in print in 1976, attributed to Texas Tech sports information director Ralph Carpenter, and was a variation on an old Southern saying.Honors and awardsOn March 1, 1996, Cook was inducted into the San Antonio Sports Hall of Fame for his work as a columnist and a broadcaster.Personal lifeCook was born and raised in Houston, Texas. He graduated St. Thomas High School in Houston and attended the University of Houston for two years. He had a wife, Katy, a brother, Frank Cook from Houston, two daughters, Marie Gian of Rockport and Alice Ann Ashton of San Antonio, a son, Danny Cook of San Antonio, and, at the time of his death, three grandchildren.DeathCook died on the night of July 3, 2008, after a long illness