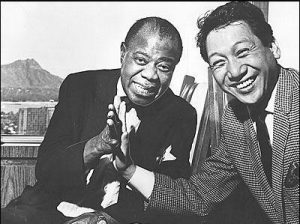 Danny Barcelona (July 23, 1929 – April 1, 2007) was a jazz drummer best known for his years with Louis Armstrong's All-Stars. He was a Filipino-American born in Waipahu, a community of Honolulu, Hawaii. He was also frequently introduced to audiences by Louis Armstrong as The Little Filipino Boy. Armstrong usually followed up by calling himself the little Arabian boy.